Treasure Of Galapagos 5 Days Itinerary B

Our classic 4-night route to the southeast Galapagos Islands anchors at the most paradisiacal bays and lovely beaches. Some of these oldest islands are true crown jewels where you can become an eye-witness of evolution. Several (sub) species have had enough time to transform into emblematic figureheads, which differ from island to island. Moreover, the open water passages take 4-6 hours instead of long overnight navigations; our stable catamaran mostly floats at sheltered anchorages, which helps you get a restful sleep. 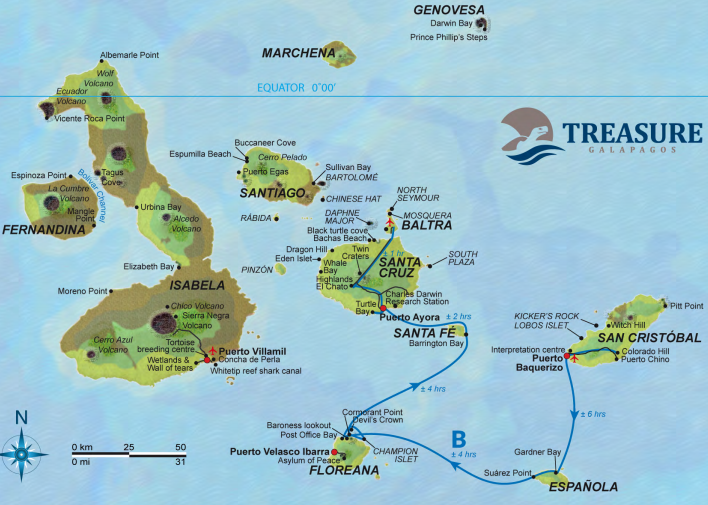 Upon arrival at San Cristobal Airport, travelers pass through an airport inspection point to insure that no foreign plants or animals are introduced to the islands, as well as to pay the park entrance fee of $100 (unless it has been prepaid). A guide will meet you, help you collect your luggage, and escort you on a short bus ride to the harbor.

Cerro Colorado Tortoises Protection and Growing Center, located at 40 minutes approximately by bus to the south east of the island. This center was built to improve the status of the population of the island tortoises. The center includes a large corral, a Visitors center, breeding center and an interpretative trail. Along this trail is possible to see different species of native and endemic plants as well birds as the San Cristobal Mockingbird, Yellow Warblers, and many species of finches and the Galapagos flycatcher

Located on the north-eastern coast of Hood, Gardner Bay provides an excellent beach for relaxing, swimming, snorkeling, kayaking, and the opportunity to observe sea lions. Here we can also observe sharks in the crystal clear ocean waters.

This rocky land spot sustains one of the most impressive and varied colonies of sea birds in the Galapagos. Along its southern shore, high cliffs rise up from the sea affording the visitor spectacular views of soaring birds and of the blow whole where water spouts up to 50-75 feet into the air according to the intensity of the surf.

Historically, this site is the location of a wooden barrel that was placed in the 18th century by the crew of a whaling ship. It has been used since this time by mariners and tourists as a post office. The idea is to carry letters or postcards to their destination by hand. Apart from being the Post Office Barrel, this site was the landing area for some of the first colonists. We will continue to the north of the island and will ascent to an elevated slope to enjoy a beautiful vista at the Baroness Lookout. It is said that Baroness Eloisa von Wagner loved this place and spent several hours watching the horizon. Within walking distance (30 m) are the ruins of what is known as her House. From this lookout, the landscape covers the coastline from the Enderby islet to Post Office Bay, as well as Cerro Pajas, the pool of flamingos and wide forest of Palo Santo.

This site offers probably the best Flamingo lagoon in the Galapagos; it is also one of the largest in the islands. It’s situated between two tuff lava cones that give the area a special atmosphere. There are various species of shorebirds to observe besides flamingos; the most frequent are common stilts, white-checked pintail ducks and other migratory birds. It is very interesting to see the two distinct beaches: “The Green Beach” (due to its high percentage of olivine crystals in the sand) and the “Flour Sand Beach” which is made up of coral.

Located in the southeastern part of the Galapagos, this island was formed from an uplift instead than a volcanic origin, this

is why is mostly flat. There are some theories which assure this could be the oldest island in the Archipelago. Santa Fe is the home of a number of endemic species like the Galapagos Hawk, Galapagos snake, Galapagos mockingbird, rice rats and one of the two species of lands Iguanas of the islands. After disembarkation in the beautiful and clear waters you will be in contact with one of the many sea lion colonies. Along the trail many salt bushes can be seen as well giant Prickly pear cactus, gigantism is a characteristic of oceanic islands. There are great possibilities of snorkeling with playful sea lions and tropical fishes.

Tortuga Bay is a beautiful white sand beach, so named because it is a nesting site for the black turtle, the visibility in the water is excellent for snorkeling, be on the lookout of the Galapagos sea lions, marine iguanas or (seasonally) mating Pacific green turtles in the surf! This is a wonderful site to for swimming and snorkeling.

Santa Cruz also offers excellent opportunities for viewing wild tortoises, both roaming through pastures in the agricultural zone and in the Tortoise Reserve, which is accessible from Santa Rosa or Salasaca. Several farms serve food and allow visitors to explore their grounds in search of tortoises. Descending through the agricultural zone into the Transition Zone where the Tortoise Reserve is located, the introduced vegetation of the farmlands is replaced by native vegetation. The pond at El Chato is surrounded by forest where short-eared owls, Darwin’s finches, Vermilion Flycatchers, Yellow Warblers, Galapagos Rails, and Paint-billed Crakes can be seen. As the visitor walks into the forests overgrown with lichens, ferns, and other epiphytes, it is time to listen carefully for the sound of heavy footsteps and the sound of shrubs being slowly crushed as the tortoises make their way through the brush.

Transfer to Baltra Airport (GPS) for your flight back to Guayaquil or Quito.