Our 3 nights route cruises along 3 of the 4 inhabited islands of the archipelago, featuring their intriguing colonization history: San Cristobal, Floreana and Santa Cruz. But we will also land at two untouched islands: the extraordinary crown-jewel of Santa Fe and the popular, really not to be missed highlight South Plaza (both with land iguanas and giant cactus trees) 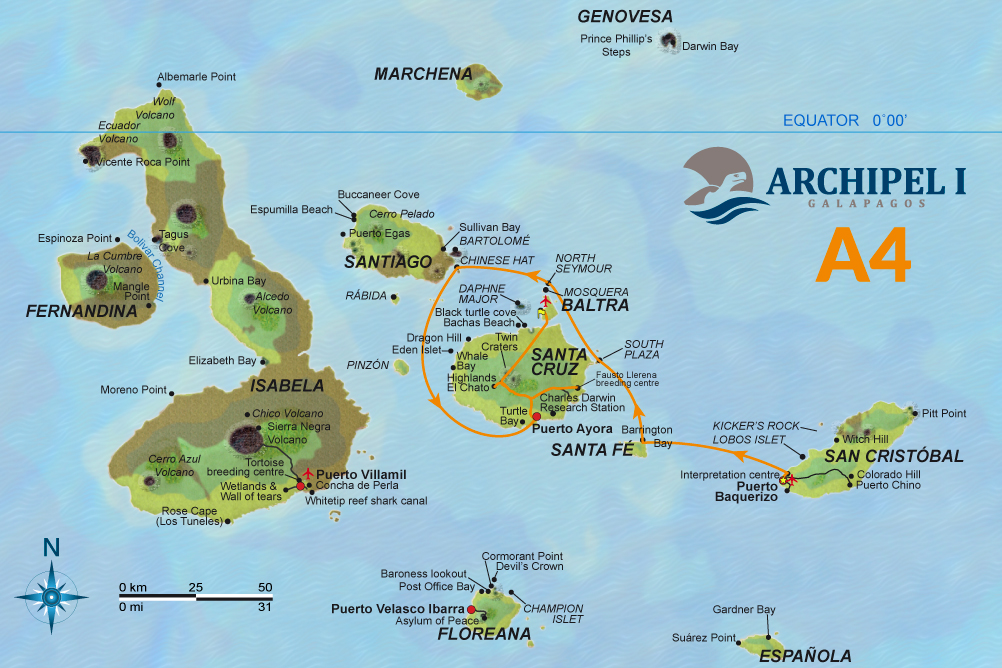 AM - Arrival at San Cristobal airport
Upon arrival at San Cristobal airport, you will pass through an airport inspection point to insure that no foreign plants or animals are introduced to the islands, as well as to pay the park entrance fee of $100 (unless it has been prepaid). A guide will meet you, help you collect your luggage, and escort you on a short bus ride to the harbour.

PM - Interpretation Centre and Frigatebird Hill (San Cristobal)
The Interpretation Centre, just outside the provincial capital city of Puerto Baquerizo Moreno, gives a perfect explanation of this unique archipelago. Its attractive exhibition is quite complete and helps you to get a clear overview and learn what makes this archipelago so unique. Information panels (in English and Spanish), pictures, documents, maquettes, and true-to-life dioramas tell various background and conservation stories about the islands in a different way. A short, though often hot, uphill trail with steps, leads from the Interpretation Centre to the summit of Frigatebird Hill. Four panoramic viewpoints show Puerto Baquerizo Moreno from above, as well as the bays on both sides of the headland. On clear days even the distant, offshore sculpture of Kicker Rock can be seen! These wooded hilltops are one of the rare places where some magnificent and great frigatebirds form a mixed breeding colony. A viewpoint with another Charles Darwin statue is a reminder that the HMS Beagle anchored in the exotic bay below.

AM - Santa Fe
Located in the southeastern part of the Galapagos, this island was formed from an uplift instead of a volcanic origin, which is why it is mostly flat. Some  theories assure this could be the oldest island in the archipelago. Santa Fe is the home of several endemic species like the Galapagos hawk, Galapagos snake, Galapagos mockingbird, rice rats and one of the two species of land iguanas of the islands. After disembarking in the beautiful and clear waters, you will be in contact with one of the many sea lion colonies. Along the trail, many salt bushes can be seen as well as giant prickly pear cactus, gigantism is a characteristic of oceanic islands.

PM - South Plaza
South Plaza is located to the east of Santa Cruz Island, and forms part of a pair of islands known as “Islas Plazas”. Despite its small size, some of the most interesting and outstanding species of the Galapagos are found here. The Plazas land iguanas are smaller than their relatives found on other islands. There are several hybrid iguanas throughout the island; a result of crossing a marine iguana with a land iguana. They are unique and recognizable at first glance
by their black/grey colour, with a land iguana’s crest, but the face and tail of the marine iguana. The big population of iguanas is due to the presence of prickly pears, their favourite food. Swallow-tailed gulls nesting in the rugged cliffs are seen along with other sea birds as Audubon shearwaters, red-billed tropicbirds, frigate birds and brown pelicans.

AM - North Seymour
Seymour is an uplifted (as opposed to volcanic) island and therefore is generally flat and strewn with boulders. There are good nesting sites here for a large population of magnificent frigate birds. Blue-footed boobies perform their courtship dance in the more open areas and swallow-tailed gulls perch on the cliff edges. Despite the tremendous surf that can pound the outer shore, sea lions haul out onto the beach and can be found bodysurfing.

PM - Chinese Hat
Chinese Hat is a 52 m/170 ft high volcanic cone, forming another islet right off the rocky coast of Santiago, where a small colony of Galapagos penguins have settled. Approaching Chinese Hat from the north, you will understand the meaning of the name. This is an excellent place to learn more about volcanoes, lava bombs and lava tunnels. You will arrive just in time to witness how this barren islet is colonised by pioneer species that have begun to sprout! Beautiful beaches of white coral sand and holes in the eroding lava fields
are filled up with lava sand, which enables rooting. Galapagos sea lions and countless marine iguanas contribute to fertilisation and thus create many favourable options for newcomers, such as saltbush and the sesuvium carpet.

AM - Twin Craters and El Chato Reserve (Santa Cruz)
The native scalesia forest of El Chato Tortoise Reserve is the best place to search for Galapagos giant tortoises in their most authentic setting! Despite the interesting breeding centres – where you are guaranteed to find tortoises in their corrals – there is nothing better
than to observe them in their wild environment. Though it can be quite moist and muddy, your visit may turn into an adventurous quest when they have left their favorite pond silently. The Twin Craters are found on either side of the road leading to Puerto Ayora. These impressive formations are not really volcanic craters and were formed by magma domes, which hardened on the outside while the lava continued flowing inside, leaving huge and empty magma chambers that eventually collapsed, leaving two large holes. The craters lie within a lush scalesia cloud forest, a high-altitude plant species that are endemic to the Galapagos. This area is also home to the carpenter finch, which uses tools to search for food. There may also be opportunities to see the vermillion flycatcher, a small red-breasted bird.

After this, assisted by the naturalist guide and some crew members, you will be taken to the airport for your flight to Quito or Guayaquil. It has been a pleasure accompanying you on this unique trip and we hope to see you again very soon!