Our Western Galapagos cruise itinerary begins in Baltra, where we will board the ship and sail towards Dragon Hill on Santa Cruz Island for an interesting hike through palo santo forests that are full of the Galapagos’ famed land iguanas. Overnight, we sail around the seahorse-shaped Isabela Island to two great visitor sites: Punta Vicente Roca on Isabela Island (with the fascinating geology of the collapsed Ecuador volcano) and then wild and pure Punta Espinoza on Fernandina (one of the most pristine islands in the world, with one of the archipelago’s biggest colony of marine iguanas and opportunities to see flightless cormorants). From there, we sail back around to Santa Cruz Island to visit the world-famous Charles Darwin Research Station, where scientists are involved in research and conservation efforts, the most well-known of which involves a captive breeding program for Galapagos giant tortoises. After that, we’ll spend the afternoon enjoying a range of activities. The following day finds us on Floreana Island, exploring its human history and stunning wildlife at both Post Office Bay and Cormorant Point. The next day we say goodbye to the Galapagos Islands after an amazing journey! 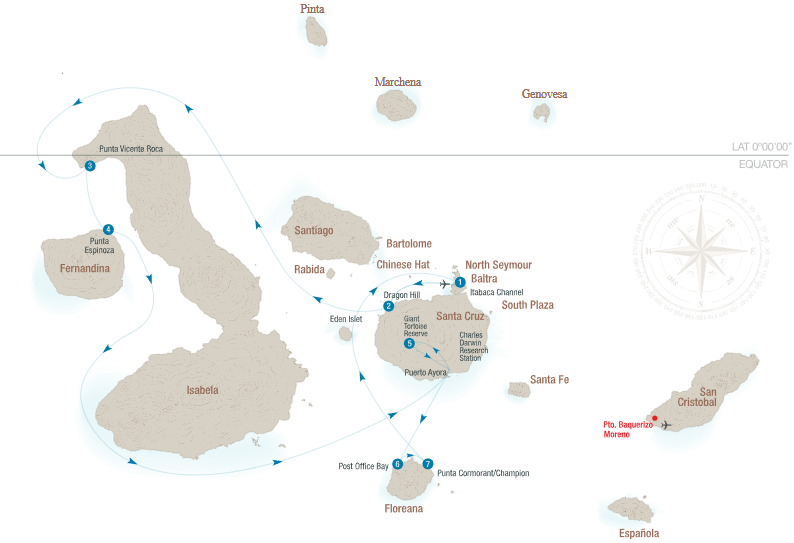 You will arrive at Baltra Island via plane in the morning and then transfer to the dock to board the Santa Cruz II Galapagos Cruise. After an introductory briefing onboard, we will partake in an emergency boat drill, after which you will be assigned to your cabin and then be invited to lunch. Cerro Dragon (Dragon Hill) [Santa Cruz Island] The north shore of Santa Cruz hosts the fascinating landscapes of Cerro Dragon (Dragon Hill). The first part of the walk here passes by a brackish-water lagoon that’s frequented by shorebirds, ducks and American flamingos. Further inland, the trail offers a beautiful view of the bay and the western islands of the Galapagos, as well as a chance to check out some land iguanas.

After breakfast, we will get to explore the coast by dinghy, all while your naturalist guides explain the dramatic geology of the surrounding area. This site is also a nesting place for numerous  Galapagos iconic species, such as: flightless cormorants, Galapagos penguins, fur seals, and boobies. Weather permitting, you will get the chance to snorkel alongside the cliffs of this area that are rich in marine life, oftentimes visited by green sea turtles and oceanic sun fish (Mola mola).

The afternoon is dedicated to exploring Fernandina, the youngest island in the Galapagos Islands. The complete absence of introduced animals is one its biggest draws, as Fernandina boasts a very unique environment with a very high density of marine iguanas. Other Galapagos iconic species found here include sea lions, Sally lightfoot crabs, hawks, penguins and flightless cormorants.

In the morning, we disembark (dry landing) at Puerto Ayora to visit the Charles Darwin Research Station. The Station consists of a giant tortoise Breeding Center and an impressive giant prickly-pear cactus forest that is home to many land birds. The Station also serves as the headquarters for scientific investigation and conservation efforts, as well as the Galapagos National Park administration. Following this visit, we will board a private transport to head up and enjoy lunch in the cooler highlands of Santa Cruz Island, which is an entirely different ecosystem.

You will have several options to choose from in the afternoon, these of which will be discussed in advance with your Expedition Leader. At the end of the afternoon’s activities, guests will return to Puerto Ayora and hop back aboard the Santa Cruz II Galapagos cruise.

After breakfast, a dinghy ride along the maze of channels on Floreana’s north shore can be enjoyed. Afterwards, you will get to experience Baroness Cove with its breathtaking views of Floreana Island. Later on, we will land at Post Office Bay to visit the historic barrel that has served as a post office in the Galapagos Islands for over two centuries. It is here that you will be invited to leave your very own postcard and/or take postcards that have been left by other visitors (for you to hand-deliver to their addressee)! Snorkeling activities are offered right off the beach. Afterwards, we will head back aboard for lunch.

Following lunch and a break, you will be invited to hop aboard the dinghies (for snorkeling) or the glass-bottom boat to explore the underwater wonders around Champion Islet – an extinct shield volcano that’s regarded as one of the best snorkeling spots in the Galapagos Islands. From there, it’s onwards to Cormorant Point, beginning with a wet landing on an olivine-crystal beach for a leisurely walk that includes a brackish-water lagoon where bird species – such as American flamingos, pintail ducks, common stilts, herons, sandpipers, and other birds – tend to gather. After this, we will continue our walk over to a white-sand beach, where sea turtles emerge from the sea at night to nest (from December to May).

You will disembark at Baltra Island in order to transfer to the airport to take your flight back to the mainland.